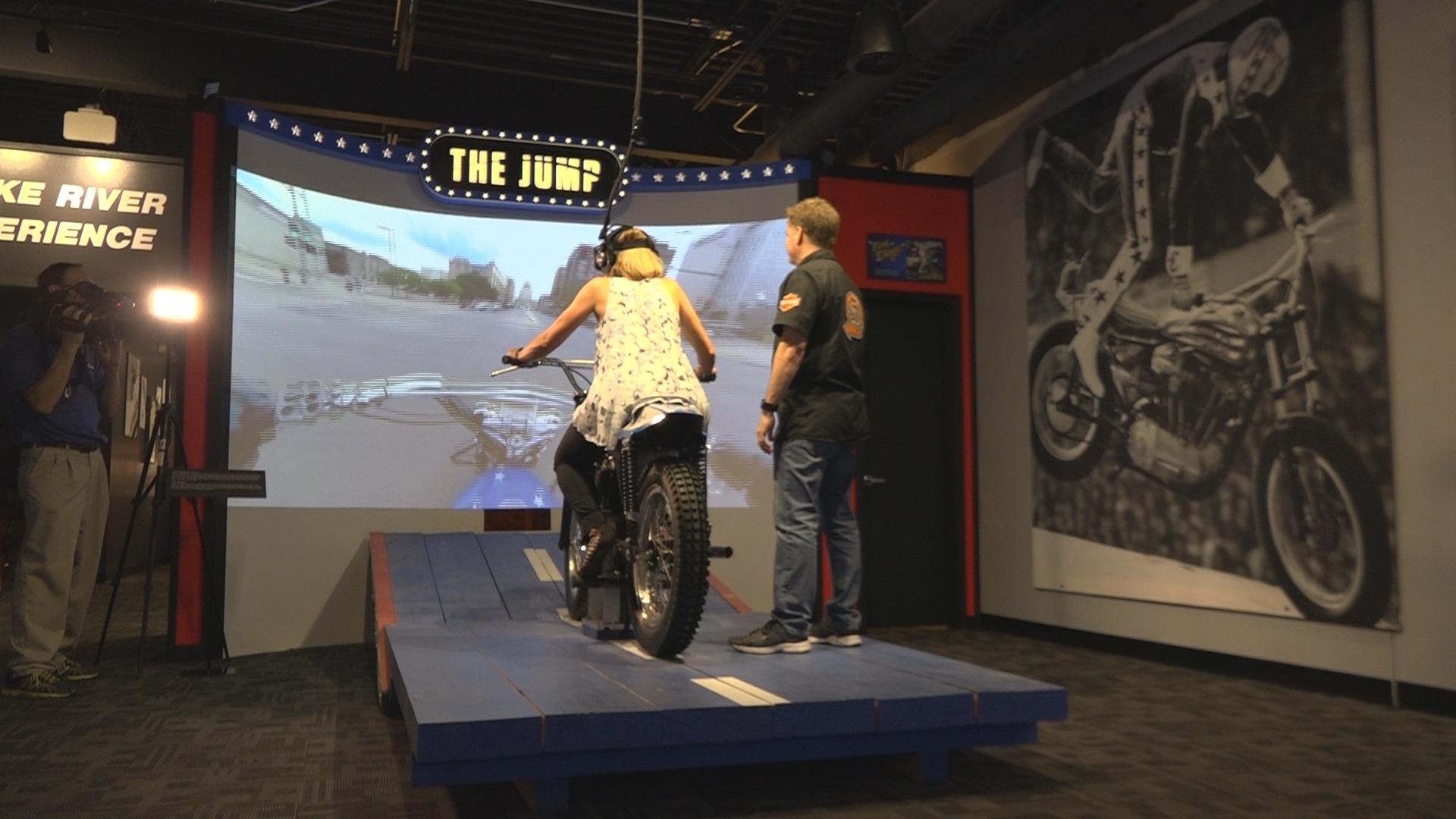 Web Extra - The story of the virtual reality jump 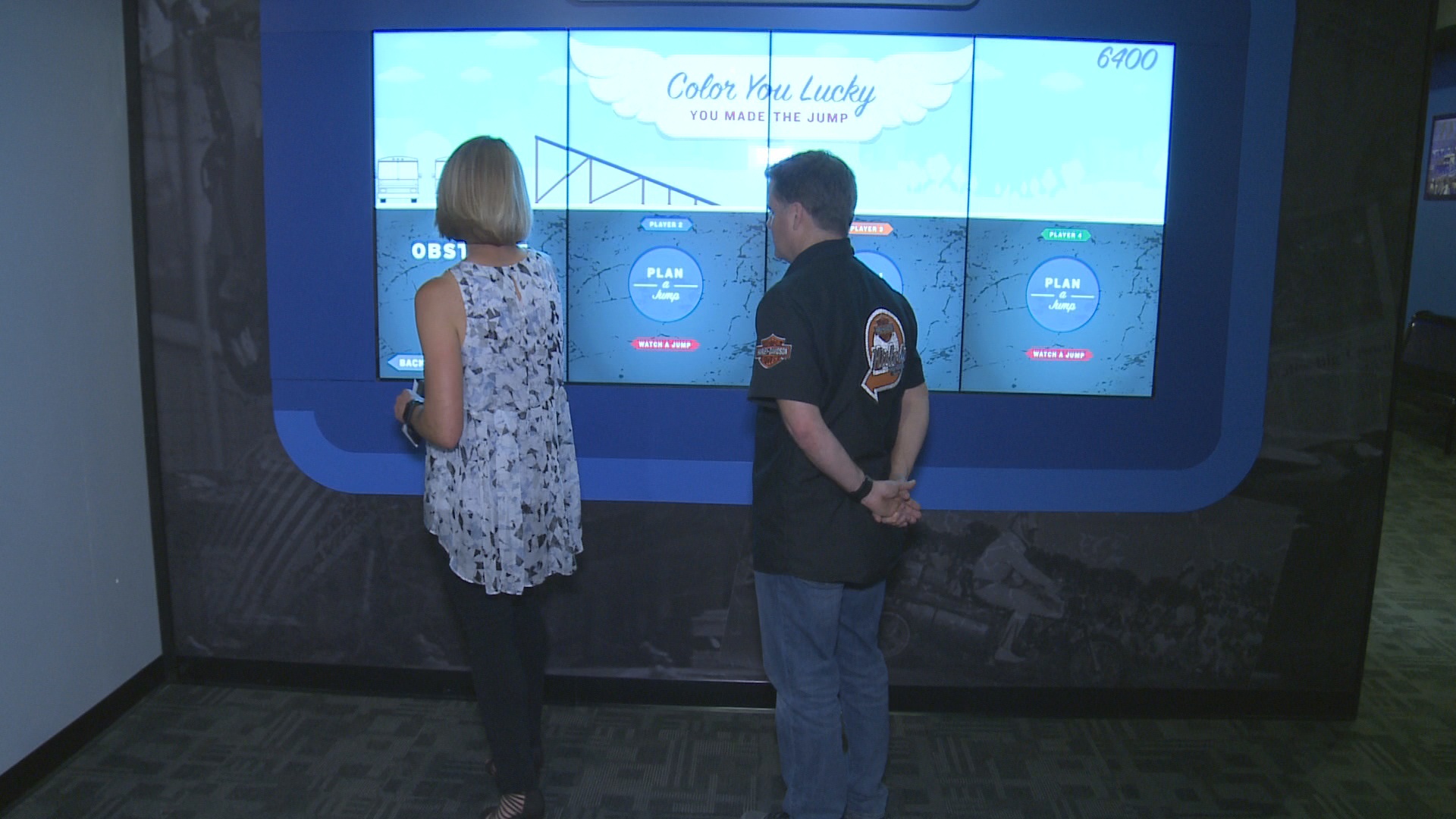 TOPEKA, Kan. (WIBW) - The idea was to create a cool Evel Knievel display at Historic Topeka Harley Davidson. As Mike Patterson walks through the tribute to the American icon about to open its doors, even he is in awe.

"It didn't start out this way," he said.

The display grew to a 13,000 square foot, two level addition to Topeka Harley Davidson, jam-packed with thousands of items, encompassing everything Evel.

A June grand opening is planned, with more surprises due to arrived before then.

It started with Evel's 63-foot-long Mack truck and trailer, known as Big Red. A few years ago, Evel Kneivel collector Lathan McKay was referred to Patterson to see about restoring the rig.

"It was in absolutely horrible condition," Patterson recalls. "In fact, when we got it, we thought we might be over our heads."

Mike's team said yes anyway, and, when it was done, McKay and Patterson agreed it needed to be in a museum. Since there wasn't one, they would build it.

"We're standing in a parking lot right now if it's not for Lathan McKay," Patterson said.

"The vision became clear, but very, very far out of reach," McKay said. "Just like the mantra is you never give up in life and that's what we've kind of done here."

Of course, you'll see photos, bikes and helmets, but there's the unexpected -- like a bag of 300 letters written to Evel while he was in a Chicago hospital, recuperating from a crash suffered while practicing a jump over sharks. They were never opened until the museum acquired them.

Patterson says they even tracked down some of the letter writers, most of whom were young children when they dictated the notes to their parents.

"They were just dumbfounded," he said.

Four-wheeled power also caught Evel's eye, so his Cadillac pickup has a place among the displays.

"A lot of his personality was his cars so we were thrilled to have the opportunity to do this - but it did cause us to have to put brand new doors on the front of our building to get this huge pickup in here," Patterson said.

Evel's whole persona was larger than life. The museum strives to capture that, from a movie theater which will play snippets of movies and TVs shows in which Evel appeared, to an interactive display which allows you to track all his broken bones, complete with x-ray images and photos and videos of the jumps at which they occurred.

Patterson and McKay also wanted the museum to include STEM - science, technology and math - education elements for young people. The desire led to interactive displays on how an engine works and trying to execute an Evel Knievel-style jump.

"There's a lot of physics involved with jumping a motorcycle over 100 feet. There's physics with how an engine works," Patterson said.

The centerpiece of the interactive displays is a 4-D virtual reality experience - complete with Evel's actual jump ramp - which gives you experience the thrill of soaring over 15 Topeka Police SUVs.

The exhibit was created when daredevil Doug Danger came to town last summer. He wore 360-degree cameras during his jump in downtown Topeka, specifically to create the experience for the museum.

"We really wanted to have the Capitol in the background, so we're representing the state and Topeka and downtown," Patterson said.

While the 4D has the wow factor, there's one display that leaves Patterson breathless. It's the actual test rocket from Evel's Snake River Canyon jump attempt.

Rescued from the bottom of the canyon, it took four years to acquire it.

"I can't believe this piece is sitting in Topeka, Kansas," Patterson said. "It's a piece of American pop culture history. We've tried to recreate the scene here. We have a 20 foot section of the actual ramp. We even went to the jump site and brought back dirt, so this is the actual dirt that's surrounding the site."

As much as the museum is about Evel Knievel, it's also about a community dedicated to sharing a story with the world. While a contractor was hired to construct the addition and a Kansas City company created the interactive displays, all the concepts, designs, finishing work and more was completed by the Topeka Harley Davidson staff.

"We really went to school learning how to be museum people," Patterson said. "We didn't hire anyone. It's a tribute to the people we have working here at this dealership. With all the talents, we just pooled talents - and we have carpenters, we have metal fab people, we have graphic design people and we used everybody right here in house. It became our mission to do something the community would be proud of."

McKay, too, couldn't be more proud.

"It's reliving your childhood. I say Evel Knievel is the fountain of youth," McKay said. "You get education, interactive thrills, experience history, everything. It's all rolled into one. There's nothing like it in the world."

It's also a chance to see a vision become reality.

"This is a fulfillment of a dream on so many levels, for so many people," McKay said. "It's magic."